In 1977 Honda announced its return to the premier racing class of World Grand Prix, which saw the introduction of the revolutionary NR500 (designated 0X) in 1978. 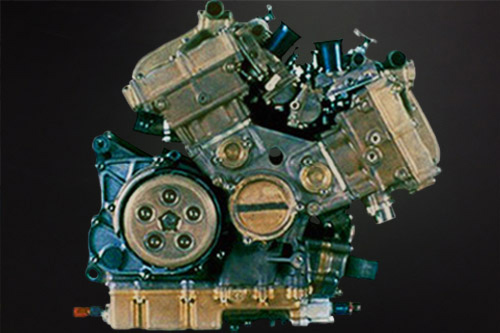 With its oval pistons, 8 conrods, 32 valves, incredible redline, and groundbreaking 100° V4 configuration, it was the first in a long line of hugely successful "vee" motors that continue production to this very day.

The NR eventually won its first race in 1981 at the Suzuka 200km. By then the vee angle had been reduced to the more familiar 90° layout we know today, and power output raised to over 130PS. The oval-pistoned 4-stroke V4 concept was finally dropped in 1982 in favour of the incredibly successful 2-stroke NS500 triple, and later NSR500R V4s. However, the project continued behind the scenes, and re-emerged in 1987 at the Le Mans 24hr as the NR750. Development of the NR750 production bike commenced the following year, and was finally released in 1992.

In 1982 HRC was formed, and debuted the first of the next generation of V4s in the form of the RS1000RW. The new 1000cc motors were race prototype versions of the road motors, reverting to conventional round pistons, and on its first outing the RS1000 managed to place 2nd at the Daytona 200. Power was quoted to be over 150PS, but the bike was heavy and cumbersome, and the power delivery rather savage, meaning the bike was very hard on the tyres. 1983, however, saw the emergence of the much more refined RS850R. The 850 motor again was a prototype based on a [bored and stroked VF750] street bike motor, but cutting-edge features included titanium valves and NR-inspired gear driven cams. 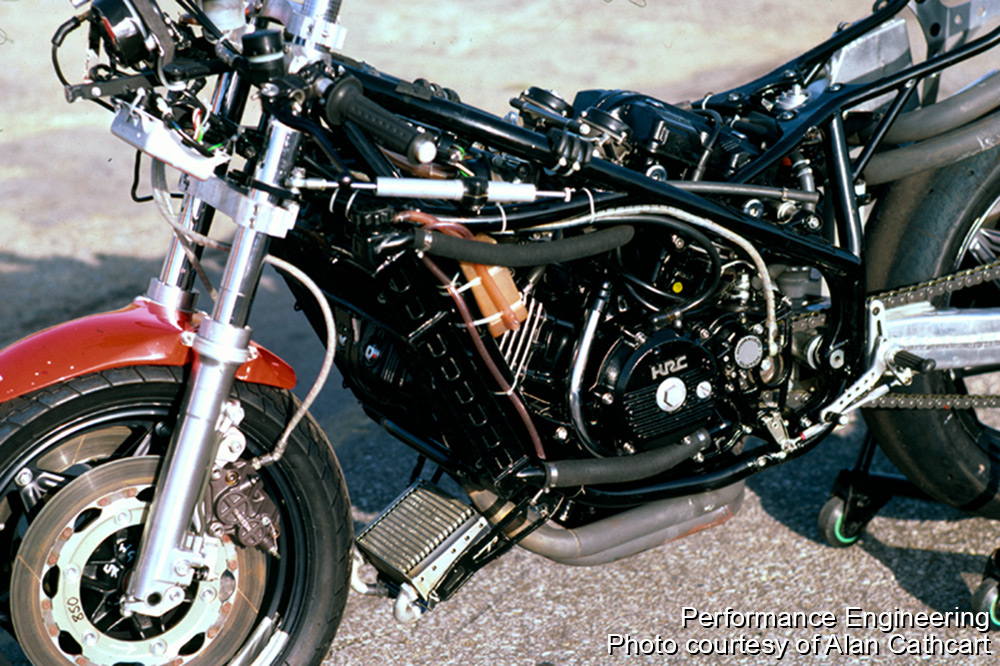 The steel-framed RS850R would lead on to an all-new alloy-framed RS750R in 1984, famously winning the Le Mans 24hr and numerous other prestigious events. The 750cc 90° V4 motor with its gear-driven cams would form the basis of many iterations over the following 3 decades, and essentially be regarded as the prototype RC30.

While adverts for the RS850R appeared in various media, only three steel-framed bikes were officially built by HRC. Of the three factory bikes, only two are known to remain intact. The RS850R was initially campaigned by the Honda/HRC Works team before being passed on to Honda Britain in 1984 where it would be run in TT-F1. One RS850 finally made its way into the hands of Howard Lees Racing/Team Bike in 1985, where an RS750 motor was fitted to comply with the World Endurance rules. The 850 motor was enlarged to 860cc and fitted to the Team Bike VF750 where it could be run in some Endurance events under F1 rules. 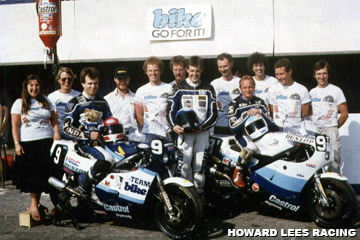 1983 to 1985 was a manic period for the RS850 V4, being ridden by Freddie Spencer, Wayne Gardner, and Roger Marshall for the factory team, Joey Dunlop at the Isle of Man TT for Honda Britain (where he recorded the legendary Duke Video "V Four Victory" on-board lap

), before finally being run under the Team Bike/HLR banner by Mat Oxley, Vesa Kultalahti, and Howard Lees.

In 1984 Team Bike finished 2nd overall (1st in class) at the prestigious Le Mans 24hr, and 4th in 1985 against the first generation of the mighty factory RVF. Both the RS750 and VF750 of Team Bike/HLR were maintained & further developed by the late Brian Capper.

In early 1985 the factory V4 designation changed from RS to RVF. 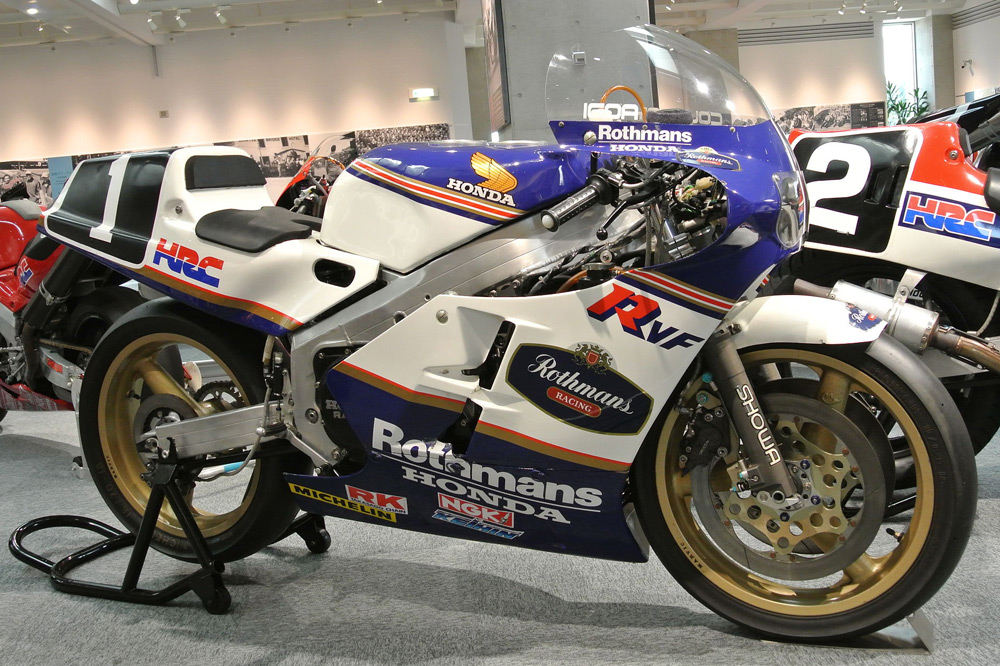 The 1985 RVF750 saw several major changes over its predecessor the RS750, including an all-new heavy duty twin spar alloy frame, a 4-into-2-into-1 exhaust system, and a revised firing order. Sleeker bodywork and magnesium wheels also made their first appearance. The RVF was a huge success, winning the Bol d'Or 24hr and Suzuka 8hr endurance races, as well as many other high profile endurance and TT-F1 races.

In 1986 Honda released the now legendary VFR750F, developed based on feedback from the RVF750 racer. The new V4 road bike engine featured a 180°crankshaft, gear-driven cams and an even more compact engine design than the previous VF750, and Honda's V4 engines powered winning race bikes around the world. 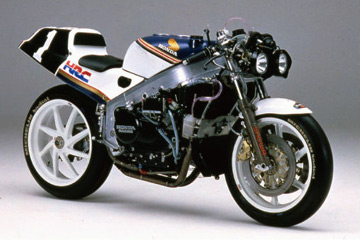 1986 also saw the emergence of the now infamous Pro-Arm single-sided swingarm on the RVF, developed in conjunction with Elf. The Pro-Arm, coupled with the quick-release Showa front forks, facilitated blindingly fast wheel changes for the works teams during endurance races, increasing their margin over competitors even further.

Despite it's huge success, evolving TT-F1 rules meant something new was needed to remain competetive in production racing, and once again HRC had the answer...

Unlike contemporary production machines from other manufacturers, HRC's new "race-spec" machine was specifically designed as a production bike that could win races. 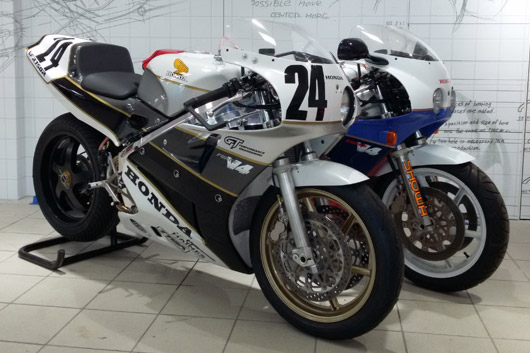 Chassis features included a single-sided swingarm from the works RVF racer, a lightweight GRP fairing & seat unit, and everything else needed to make the RC30 the most competitive machine in its class almost "out-of-the-box".

RC30s were almost entirely hand-built, and debuted in 1987. In 1988 a superbike version powered by a factory RVF750 based engine won both the manufacturer's and rider's title in the inaugural FIM Superbike World Championship in the hands of Fred Merkel.

The VFR750R/RC30 was a spectacular success, winning the SBK world championship again in 1989, and also back-to-back Maccau GP wins in '89 & '90 by Robert Dunlop and Steve Hislop respectively. By 1990 the RVFs and RC30s accounted for half of the entire grid at the 8 Hours of Suzuka!

From 1988 to 1993 it's almost impossible to list the RC30's success. From domestic superbike series championships all over the world, to Isle of Man TT dominance, and FIM World Superbike, Formula 1, & World Endurance, the VFR750R and RVF conquered all.

The introduction of new Superbike regulations made it necessary to develop a new race-oriented machine with even higher potential, leading Honda to begin development of the RC45. 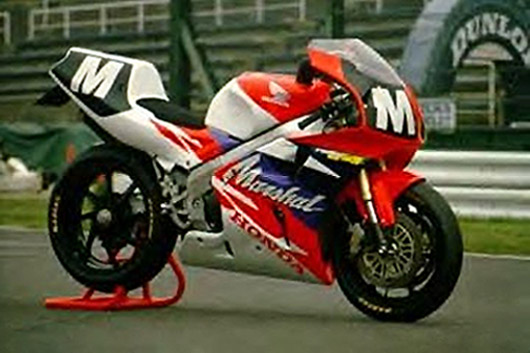 First seen at the 1993 Suzuka 8 hours endurance race in Japan, the RVF750/RC45  debuted in the form of pre-production HRC kitted bikes, and were used as marshal bikes around the circuit. The production model went on sale the following year as the RVF750-RR/RC45.

Although released as a production road bike, as with its predecessor, from it's very conception the RC45 was designed as a base machine for racing.

In a departure from Hondas previous V4 750cc layout, the RC45 received a shorter stroke and larger bore as well as new aluminium-silica bores. Moving away from the VFR750, RC30 and Works RVF’s configurations, the RC45’s gear train now ran up the right hand side of the motor rather than up the centre. This allowed the motor to be narrower and have a shorter, stiffer crankshaft.

The RC45 also received fuel injection. The system is almost identical to that first used on the NR750. It comprises of a PGM-FI electronic control unit and separate ignition unit. Seven individual sensors feed data back to the PGM-FI unit to control the fuel injection and ignition timing.

In 1995 at Albacete, Aaron Slight took the Castrol Honda RC45 to its first World Superbike vicory, but it wasn't until 1996 that the RC45 started to get into its stride. Multiple wins for HRC and Castrol Honda finally saw the bike as a championship contender, with John Kocinski winning the 1997 FIM World Superbike title. 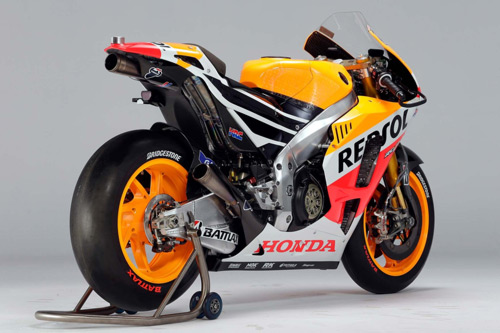 For the new era of MotoGP Honda once again chose a different path from its rivals and developed the RC211V, powered by a revolutionary V5 engine. Featuring a 75.5° bank angle, the engine had three front cylinders and two rear cylinders. Never before in road racing had there been a machine with such a unique engine architecture. The RC212V dominated the competition and won forty-eight races, more than any other 990cc machine.

For the 2007 season, engine displacement was reduced to 800cc. Most of Honda's rivals simply made smaller versions of their existing machines. Honda, however, designed a completely new V4 engine based on feedback from the RC211V. Once again Honda made history by introducing the first V4 engine in road racing's premier class. The new engine was extremely compact and offered superb mass centralization, permitting use of a more compact, more aggressive-handling chassis. The RC212V is the ultimate expression of Honda's V4 technology.

"Using original technology to win at the pinnacle of motorcycle racing."

To achieve that goal, the RC212V development team worked at a feverish pace. Their aim was to get more top speed and to reduce rider workload, by making the power easier to control. To do this they developed highly advanced electronic control systems to make the machine respond so faithfully to rider inputs that it would seem like an extension of the rider's body. The team also developed many revolutionary new technologies such as the seamless transmission that significantly reduces the shock loading caused by shifting. After a five year drought, the results were there for all to see in 2011 (the last year for the 800cc machines) as the Honda RC212V took the rider, team and constructor championships. Once again Honda reigned supreme at the pinnacle of MotoGP racing. For 2012, engine displacement was again increased to 1,000cc. Honda challenged this new era in MotoGP racing with the RC213V powered by a newly developed V4 engine.